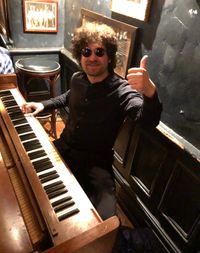 It's my 36th Birthday and I'll be playing original music and covers with a great band! With special guests!

“Never has sadness and despair sounded so beautiful.  This must be how the angels sound when they look down on how we are messing up this world.” - Phil King.

Jordan Siwek’s songwriting focuses on turning darkness into light and bringing positive messages of unity and hope to an increasingly divided world. A perfectionist in the studio, it took several years until Jordan was satisfied with the album. Each song on the album represents a different powerful moment in his life, with songs evolving through the recording process. Essentially Pop wrote that Jordan’s songs, “inject optimism into its listeners with melodies that surge with enthusiasm and radiance." Jordan is currently working on a big music video for his new single, Lover and a Giver, a song that’s a direct response to these turbulent times and is written to be an anthem of love, hope, and unity, while also serving as a reminder to appreciate the beautiful things in life and to offer a much needed catharsis.

Jordan’s musical roots stem from his experience on Broadway as a child actor as well as his love for blues, jazz, and soul, which he infuses into his piano-based tunes. The L.A. Music Critic, Bob Leggett wrote that Jordan’s music, “truly belongs on the radio, and his songs would also make great placements for commercials as well as television and film” and “we may be witnessing the birth of the next Elton John, as Siwek’s music has that same feeling, especially Elton’s early material.” Inspired by the legendary songs of The Beatles, Stevie Wonder, Elton John, Billy Joel, and John Legend, Jordan draws inspiration from any genre of music which revels in beautiful and catchy melodies and lyrics. Essentially Pop raved, “Thriving on memorable pop-hooks, Sun Inside You is a resplendent and delightful debut – a much needed release of harmony and assurance in 2018.”